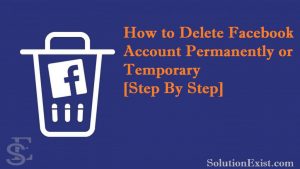 Today SolutionExist Team Describing, Step by Step Method of How to Delete Facebook Account Permanently or Temporary. We all know that Facebook is an American Social networking service, Which is accessed by a large range of Android Smartphones, Laptops, Tablet and computers over the Internet and mobile networks. Facebook CEO Zuckerberg announced that The Facebook company’s data revealed to 600 million mobile users, 219 billion […]

How to Show / See Saved WiFi Password In Android Without Root [Step by Step] I have surfing a google and find that there are many peoples are searched that How to Retrieve / Recover / Show or See saved wifi password in android smartphone without root. And i show that there are many articles […]